“Very real fears about the economy triggered a terrified, fetal response, and instead of voting for a leader whose views were complex, the simplistic solution won out. It may also explain why so many feel profoundly helpless in the wake of this election. As some of us find ourselves unable to sleep at night, it may be that we are re-encountering those very deepest fissures from prenatal times.”

Read more about how the traumas experienced in utero shaped the outcome of the US Presidential Election in our latest article on the The Huffington Post, by IN UTERO Director, Kathleen Gyllenhaal, and Producer, Stephen Gyllenhaal. 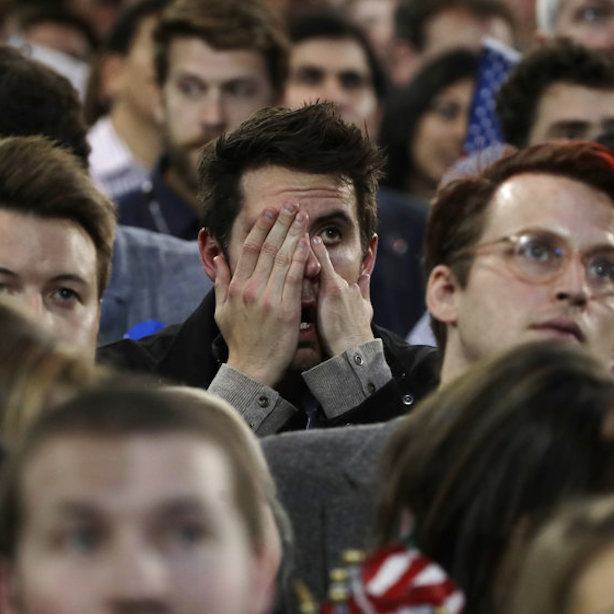 It is still nearly impossible to believe what has happened. Nearly half the voting electorate felt things were so terribly wrong that they needed a President Donald Trump. And since the election, those of us in the other camp can agree on one thing:

Is history about to repeat itself? Leading to mass deportations, stock market crashes, racial, sexual and political violence — compounded by climate change and nuclear exchanges?

Already, voices rise up against this — Harry Reid, Michael Moore, Elizabeth Warren, Bernie Sanders — and thousands of citizens stage protests across the country. Others will follow and we must do our part. But will it be enough? Perhaps we will be lucky and skillful. Perhaps we won’t.

But if history keeps repeating itself (as it seems to always do) — how in the world are we going to survive in the long term? First things first, let’s make it through the short term, the next few years. Let’s fight like hell — be brave, brilliant, honest and hopeful.

But don’t we also have to ask ourselves why every one of us — right, left, center and disinterested — feels that things are so terribly wrong?

Many conservatives will tell us that at core we humans are corrupt. We need a strong military, personal discipline, cultural order. Religions also speak of our inclination for evil and self destruction — the Devil, Hell, the forces that work against God.

As we look at our current trajectory, it’s hard not to see some of this doomsday rhetoric having validity, yet it remains crucial to turn to scientific methodology in the midst of this chaos. If we are to survive long term, we’re going to have to find an answer to this core question of fear, which is now front and center for all of us.

While interviewing scientists across the globe about pregnancy and trauma — for our documentary, IN UTERO — we began to uncover the degree to which many of us (maybe all of us) have experienced fear before we were even born. We have all been both nurtured and traumatized by our time in the womb. When nurtured, the process of developing in utero goes well, but when traumatized, there can be a multitude of problems which effloresce as we are born and grow up.

Increasingly, there is evidence that traumas during pregnancy may well be the root cause of most maladies — schizophrenia, depression, anxiety, cancer, ADHD, heart attacks, and so on. If this is so, then isn’t it possible to hypothesize that — even though it sits outside of our ability to remember consciously — many of us (maybe all of us) have a deep sense of something being terribly wrong from the very beginning?

Do many of us (perhaps all of us) suffer from some degree of PTSD that stems from our experiences in utero, even as we also experienced the amazing process of coming into existence within the womb?

When a person with PTSD experiences certain stresses in his/her daily life, it can trigger the original trauma. Similarly, fears in adulthood can trigger those unremembered traumas in utero — a time when we were so tiny, defenseless and profoundly vulnerable.

Maybe this explains why so many voted for a known sexist — a bully. Very real fears about the economy triggered a terrified, fetal response, and instead of voting for a leader whose views were complex, the simplistic solution won out. It may also explain why so many feel profoundly helpless in the wake of this election. As some of us find ourselves unable to sleep at night, it may be that we are re-encountering those very deepest fissures from prenatal times.

If all of this is true, then perhaps we can begin to look at each other differently. Perhaps we can find ways to understand how much we are in this together and have been since our very beginnings.

Perhaps we can begin to completely rework how we look at the miracle of pregnancy. How is it that a Mozart, Einstein, Abraham Lincoln, Eleanor Roosevelt or Gandhi came into being? How can we support pregnancy so that more beauty, invention, courage, clarity and compassion can be brought into this world? Can science help us with answers? Can future generations be filled with peaceful geniuses who solve what today seem to be intractable problems?

We need to reduce in utero trauma so that future generations make the right choices and thrive. We need to utilize the emerging therapies that can help us heal our trauma. Only then can we address what challenges us today (i.e., the wreckage of a Trump presidency) not as tiny, helpless beings, but as adults.

If history keeps repeating itself, then we need to break the pattern. We need to educate ourselves about the forces that shape us from the very beginning. We need to become aware of the obstacles — the trauma — within ourselves that needs to be overcome. Otherwise, we will keep choosing the traumatizing bully over the leader who searches for complex, adult solutions — because the bully will always speak to, and exploit, our unresolved internal pain.