My 2-Year-Old Is An Addict

"Building relationships is the key to being human. All of those combined hours that my son had put into those iPad puzzles, all of the attention he gave them — he got nothing in return."

Would you hire a babysitter who didn’t engage with your son?

Read more from IN UTERO Director, Kathleen Gyllenhaal, Gabor Maté and other experts in this article on The Huffington Post. 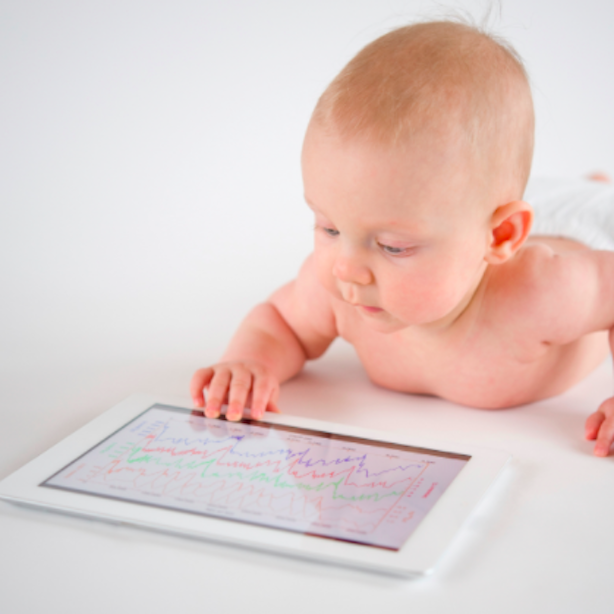 My husband and I deal with a lot of tech, for work and personal use. Between us, we have two iPads, two Macbook Pros, one Macbook and two iPhones. We’re on them all the time. Then, we had a baby. We kind of knew in our gut that we should keep our son away from these devices for as long as possible. Just watching his chubby little infant hands reach for our phones and touch those slick screens was disturbing for some reason. So, we kept them out of reach.

But as he got older, and more mobile, he managed to get to our iPhones and iPads, and when he learned how to climb, he got to our computers.

So, after a year or so of placing things ever higher, we started to cave in. The breaking point came when I was facing a 10-hour flight with our then 18-month-old. A friend suggested I load up my iPad with toddler games and let him play. An elegant solution for a situation where you’re expected to remain placidly in your seat for hours on end.

My friend assured me there were really good, educational apps, so I looked. Sure enough, there were sorter apps, puzzle apps, logic apps, matching apps, ABC apps — I felt like I’d hit the jackpot. Though I still felt that sense of unease about giving him the “device”, I figured it’d be a last resort.

On the plane, when I got through the books and other toys, meal time and diaper changing, my energy flagged. I gave him the iPad. He didn’t get the games at first, but remarkably, after just a few minutes of showing him how, he started moving shapes to the appropriate places, matching images correctly, and solving cute puzzles of animals and choo-choo trains.

I was amazed at his ability to focus, the ease with which he wielded this incredibly sophisticated technology — his sheer intelligence. The flight was a success.

As the months wore on, he asked more and more for “puh-puh” — puzzles (or the iPad, they were synonymous with one another). At first, I would say no, but then there’d be those times when I was at the end of my rope. A long day at work, or sick with the flu. Or just dead tired. And I’d give in.

But each time, his desperation became more extreme. And I’d watch him play. Sometimes he didn’t win, and he’d get very frustrated and cry out. He seemed in pain. Then, he’d get into the rhythm again, and complete the puzzles successfully. But I saw no joy in his success. Yes, he was focused intently. He was quiet. He was thinking. But what was he getting out of it?

And then one day, as I ended an iPad session, he became inconsolable. He had pleaded and whined before, but this was different. He cried “puh-puh!!” for almost an hour, which turned into a pathetic moaning by the end. He had played with the iPad (aside from FaceTime chats with family and friends) about a dozen times — and he was already behaving like a full-blown addict.

I talked to two close friends — Hagit Golan, a prenatal bonding specialist, and Dr. Gabor Maté, the best-selling author and expert on addiction — whom I had gotten to know while making my documentary on prenatal life, IN UTERO.

They both explained that a child (not to mention a baby or even a fetus — or an adult, for that matter) needs connection. Wants only connection. Building relationships is the key to being human. All of those combined hours that my son had put into those iPad puzzles, all of the attention he gave them — he got nothing in return. When I put the iPad in my beloved son’s chubby little hands, I was giving him a one-way relationship. I was giving him an indifferent, unloving, inhuman babysitter. Would you hire a babysitter who didn’t engage with your son?, Hagit asked.

There is a section in my movie that refers to the Still Face Experimentby Dr. Edward Tronick. In the experiment, a mother plays with her one-year-old, who is strapped in a highchair. He smiles, laughs, claps his hands. Then she is instructed to make her face still and expressionless. She is not to react to her son for one full minute, no matter what he says or does. Just look at him blankly. The result is painful to watch. You basically see this vibrant, happy child break down in the space of sixty seconds. His whole world crumbles. His mother, who is his primary relationship, is simply not there.

She’s there, but she’s not there.

And that’s exactly what the iPad, iPhone, Facebook and Twitter and all these social media platforms do — they promise connection, but in the end, they’re not really there. There’s no physical contact, no emotional connection. Just a slick, enticing, flat touchscreen.

Why was my son begging for the iPad for almost an hour? Because he was addicted. And the addiction developed just as any other addiction does, Gabor explained. When you are in emotional pain, you seek nourishment (connection, love). What technology gives you (like heroin, sex, gambling, or shopping) is temporary relief from your pain. But the pain comes back, and so you need more.

Are those puzzles educational? Maybe they exercise some intellectual part of the brain, but the collateral emotional damage that comes from engaging in a neglectful, one-way relationship, overrides any such benefit.

What’s better than the iPad? Human connection. So, what did I do? I put the iPad high up on a shelf — and left it there. Then I sat my son down and told him mommy had made a mistake. But mistakes can be fixed. So, ‘no puh-puh’ anymore. And then I bought puzzles. Lots of puzzles. Wooden puzzles that you could touch, feel, smell.

Does my son ask for puh-puh still? Of course he does. But then he thinks for a moment, and declares, “No puh-puh.” Then he leads me to the table where our new wooden alphabet puzzle is scattered, waiting to be assembled…together.