The Science Behind Pregnant Fathers

"So actually, I’d say that we’re all pregnant. All the time. The whole planet is nothing but pregnant people."

IN UTERO Producer Stephen Gyllenhaal discusses being a pregnant dad and shares why it truly takes a village. 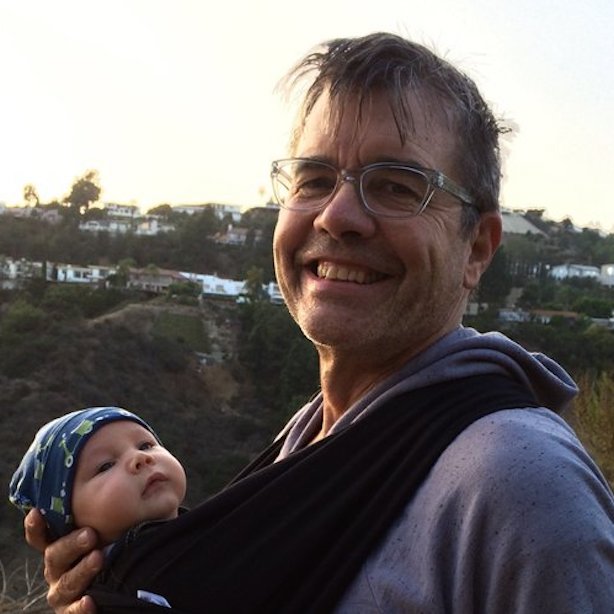 Before we discuss the science of my being a pregnant father I should divulge that I’ve also been a pregnant grandfather. I know there is much controversy nowadays around imagining that I am pregnant when my wife is the one navigating morning sickness, hormone flooding, weight gain, back pains, labor pains, fears of all of the above and so much more, but the fact is that a mother-to-be or a mother who is about-to-be-a-mother-again needs all the help she can possibly muster and if deciding that we are pregnant alongside her helps, I say go for it.

Take this blog that my wife, Kathleen, has been developing or the movie she made (while pregnant), IN UTERO, about the science of pregnancy. My job was to be there whenever it was possible. There are the old clichés — go out at midnight and get her pickles or chocolate covered strawberries, whatever. Down through history we’ve been pretty clear how much a pregnant mother needs support. In fact one of our presidential candidates (who happens to be a mother) noted many years ago that it takes a village to raise a child.

But in the process of making IN UTERO, Kathleen and I discovered the profound importance of every single person around that pregnant mother. For instance, as Dr. Thomas Verny notes in Kathleen’s film, “Water is a better conductor of sound than air. So it is actually easier for the baby to hear inside the womb than it is for the baby to hear outside.”

Which means that a voice, any voice, is clearly heard by that little being. If the mother feels happiness when that person is around, her body experiences a mix of chemical reactions. As Dr. Gabor Maté notes in the film, “Every emotion has a chemical correlate”. That chemical correlate (cortisol, endorphins, etc) goes through the placenta into the baby who feels the same feeling as the mother. As noted in Kathleen’s last blog, research has proven that the baby’s developing brain processes feelings from a very early stage.

So if Mom and Dad are getting along or Mom and the Grandma-to-be are not getting along, that little being takes in the same “chemical correlates” and feels happiness, anger, fear, joy, terror. And that little being associates it with a voice that is distinctly conducted through all that water in the womb. So the tribe surrounding the mom is right there with the baby. The baby is connected to those family members. Therefore, I say consider yourself pregnant, dads and grandparents…

And it’s easy to go one step further.

Let’s say you’re an aunt, uncle, son, daughter, cousin — even if you are a stranger to a pregnant woman — I say you are a pregnant stranger, especially when a mom-to-be (who might also have a toddler) is trying to open a door with a handful of groceries and a large belly. Be the stranger who walks past doing nothing and that “chemical correlate” of frustration and hurt is sweeping into that little guy inside. Or be the stranger who opens the door, who smiles, and you’re sending good chemical vibes directly into that little future girl who might well be president one day.

So actually, I’d say that we’re all pregnant. All the time. The whole planet is nothing but pregnant people. And this is not a joke, because another major subject that my wife discusses in her film is transgenerational trauma — which is the discovery that genes are turned on and off in utero depending upon such things as wars, family tragedies, natural disasters…

Everything that unfolds in the world around us that affects any pregnancy is affecting the next generation on a genetic level. This isn’t some moral question or form of religious guilt. This is pure hard-wrought science arrived at by painstaking research. This is the core lesson of Epigenetics, the fastest growing field in science, which has discovered that our genetic dynamic is shaped by what has happened to our parents, grandparents, great-grandparents, a kind of biological karma. Which is another way to look at our role in regards to pregnancy as well — man, woman, or child.

Each of us in small ways and big ways is shaping the future generations by how we treat our pregnant women. It also happens to be confirmed by science that even the way we treat non-pregnant women and girls (who are carrying all the eggs of the next generation) has an effect on the genetic structure of those eggs, which will one day form a child. And finally there’s the male’s direct biological contribution — that minuscule sperm. Is there some negative effect on how sperm are formed if we treat ourselves and those around us negatively?

How far does all of this go? How much can we actually truly change how the species evolves by looking ever closer at what it is that we really are? Only time will tell. Only science will tell. But what’s clear is that because we’re an endlessly pregnant species, the future rests with each and every one of us.